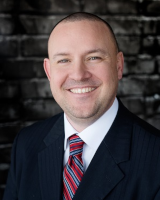 Michael L. Gust is a shareholder in Anderson, Bottrell, Sanden & Thompson. He received his B.S. degree from North Dakota State University in 1998 and his J.D. degree, with distinction, from the University of North Dakota School of Law in 2001. Currently, Mr. Gust is licensed to practice law in all state and federal courts in North Dakota and Minnesota.

For over 30 years our lawyers have served not only the Fargo-Moorhead area but the states of North Dakota and Minnesota. Time has also brought growth. Founded by a few attorneys, the firm now has over a dozen lawyers working in diverse areas of the law including real estate, corporate, banking, debtor-creditor, family, and estate planning. When necessary to protect the interests of our clients the firm also maintains a significant litigation practice.

Our lawyers are licensed to practice in the state and federal courts of North Dakota and Minnesota.